Namboboto village in Kenya has long suffered from poverty and high rates of HIV and AIDS. As a result, many children have been orphaned and left in the care of their grandmothers. Most of these women, aged 45 to 60, have small ancestral plots of land where they practice subsistence farming. However, they have struggled to provide for the children’s daily needs, so they have also relied on handouts from religious institutions and other donors.

To address this challenge, the Fountain Youth Initiative, with support from the 1% Fund, has provided 30 village grandmothers with 60 female piglets and four sows. The Grandmother Pig Revolving Fund Project aims for sustainability by having the grandmothers donate two piglets from the litters that their own pigs produce to new groups of grandmothers. 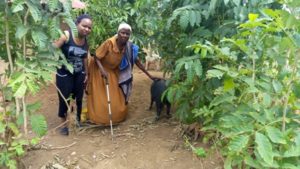 The Team then organized a three-day training seminar for the beneficiaries. The grandmothers were divided into two groups of 15 members; each group elected two leaders to form the Project Development Committee. The Committee attended a two-day training on leadership, basic veterinary issues, the handing-over process and report writing. Local young people were engaged to help with building the pigsties.

The Project Team and the Project Development Committee organize monthly meetings for the beneficiaries. They engage the Agricultural Extension Officer to vaccinate the pigs free-of-charge for a period of 24 months, as per the agreement with the local authority. The Project Team collects and compiles project data on a monthly basis and submits reports to the One Percent Fund. 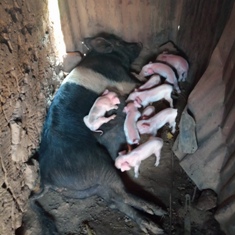 Since the start of the project, 125 households have been equipped with information on pig husbandry and the care of HIV-infected or affected orphans. This is raising living standards and ensuring the proper management of the pigs provided to each family.

Forty-nine infected and affected orphans under care of grandparents benefitting from this project have either been enrolled or readmitted in school, thus increasing the enrollment rate within Namboboto community.

Total household income for households participating in the project has increased by approximately 80 per cent. Pigs breed rapidly, so all of the beneficiaries are able to sell pigs to gain a continuing income.  Some have used part of proceeds to buy cows, allowing beneficiaries to meet most of their basic needs. This in turn has led to a broader improvement in living standards for the community.